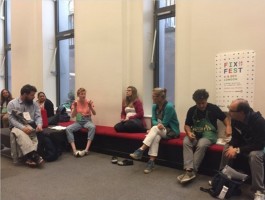 In October 2017 I gave a lightening talk at the alltogether awesome weekend called FixFest. Organised by The Restart Project, it was a gathering of repair-heads from all over the world, speaking about community work, practical skills, lobbying for change and generally hvaing a ball. It also saw the launch of the Open Repair Alliance and the first International Repair Day (21st October 2017, to fall on the 3rd Saturday of October forevermore!).

At a mere 5 minutes each, the lightening talks covered all sorts of topics from our very own the background of our Hackney Fixers to tool hacking to departmental/governmental involvement/co-option of repair parties. Below is my soap-box stance...

Leaning on a couple of ideas from an essay called Continuous Design and Redesign by John Chris Jones, what follows is a somewhat affirmative but mild polemic about repairing together.

I’m going to start from this quote:

'It’s so hard to unlearn, and unlearning is the essence of designing.

To share the design process with users is not as easy as it sounds.

It needs a change of roles, of self-images, on both sides.'1

As repairers we are simultaneously unlearning while we learn.  Rather than making something new, we intervene with that which already exists. these interventions potentially display our politics: they are slogans not shouted but made. They show interdependences, and repair-making is an informative act in the midst of object lives, rather than a finalising design.

By understanding that breakdown often stimulates innovation2, and that repair-making can develop understandings3, we can understand repaired objects as personal, political, active and rebellious. Also, importantly to me, it can develop, refresh and promote ways of working against obsolescence and waste, while also building communities.

Fixing things and sharing fixing skills, means one becomes what John Chris Jones calls a ‘professional encourager’: working with people - encouraging engagement with the repair and the idea of repairing. We also begin to share the ‘decisional burden’4 of repair as a user activity and service.  In this volunteer role, we accept what Jones calls the roughness of nonprofessionals, working with materials to hand, and work already done.  As such I feel repair puts the process back in to the object.  Repairing permits us to give up control, to work with the existent, changing our roles to work in a collaborative and facilitative way.

Reading Erich Fromm’s writing about obedience and disobedience, I think repairing is both 'obedient' to a 'reason or conviction (autonomous obedience)' of being anti-waste, and disobedient to those of our consumer culture, where, according to Fromm, 'obedience to a person, institution or power (heteronomous obedience) is submission.'5 To volunteer and share our repair skills is to push back, it is to act both obediently to ourselves, and disobediently, against blind capitalist consumerism.

This in turn embraces Fromm’s mode of being by which he means to 'to share, to give, to sacrifice - that owes its strength to the specific conditions of human existence and the inherent need to overcome ones isolation by oneness with others.' Volunteering as a repairer can therefor be considered a form of mutual aid - a anarchist principle of 'cooperation and generosity and solidarity.'6

On a slightly different note, Neil Cummings suggests generosity as a way to 'overwrite scarcity with abundance', advocating we 'keep giving and receiving.'  He calls this 'radical generosity.'7 Volunteering could also be considered a form of radical generosity that could overwrite emotional and material scarcity, and create connections needed for well-being.

The key elements for well-being  are listed by positive psychologist Martin Seligman as being positive emotion, engagements, relationships, meaning, and achievement.  He says that these elements are subjective and objective, and in order to fulfil them, we must engage positively with others.8

So potentially this volunteering goes further than just encouraging repair. It creates social ties, via group activity and showings of generosity and skill. These ties become firm through repetition, and create deposits of abilities and accessible knowledge hubs.

So to sum up, by repairing together we contribute to the repair movement for the post-abundance era. Stewart Brand states that maintenance is material learning9: I posit repair as being material, social and environmental learning. The connections made through repairing ‘de-garbage’ materials and knowledge10, and redefine ownership, values and power.

Repair is a Resilient act, material and social; local, adaptive and sharing. It is an act of obedience to ones self and ones communit(ies), and disobedient to hegemonic practices which do not serve the common good. Jointly we explore the professionally encouraged roughness of Do It Together repairing and community building, and we cultivate the generous, connected mode of being. I propose that through repairing we actively chose to do this. 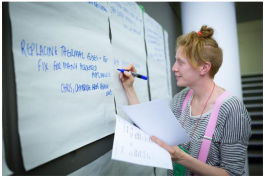 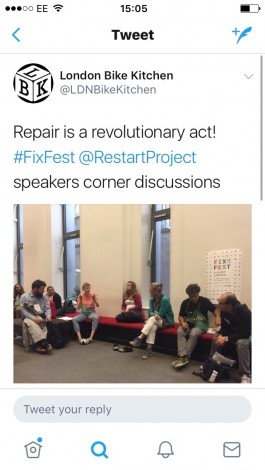