THE DEPARTMENT OF REPAIR
Curating and Exhibiting
January – February 2015

The Department of Repair, a six-week project at Camberwell Space, was intended to contribute to the emergence and sustainability of repair cultures.  Part One was an exhibition and series of generative workshops run by practitioners. Part Two was a static exhibition including workshop outcomes, a presentation and other events.

As an activist designer, I took the lead in co-curating The Department of Repair, highlighting obsolescence as an issue, ‘publicly call[ing] for change to resolve that issue’[1], and to frame repair as a connector between objects and people. The exhibition was also set to share and generate ideas, and reify repair as DIY sustainability.  Exhibiting my own work amongst this, I reflected on my expanded making practice, gathering critical response to my studio and curatorial practice(s). Free repair workshops by invited facilitators during the exhibition questioned ideas of identity and transaction in a social frame. I hoped to create ‘a counter-narrative aimed at generating and balancing positive social, institutional, environmental and/or economic change’[2] through this design activism.

The Department of Repair explored the dynamic force of damage, and visible repairing, giving me new understanding through these.  Displaying, developing and testing material and immaterial manifestations of my practice through it, and exploring that of others, the gallery became an extension of my studio, a temporary learning site, and a public space for personal reflection. The exhibition embodied a visual language of repair by makers. Through it, I reflected on my studio and curatorial practice, gathering responses to both.  By inviting others to facilitate repair workshops, I made learning potential beyond my skills and began a community of practice, the gallery became medium, studio, and site for learning and reflection.  Combined, this became a discourse between objects, methods/systems, and agents, and an anarchéological bricolage of distributed knowledge.

[1] Thorpe, “Design As Activism: To Resist or to Generate?” 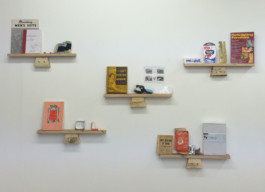